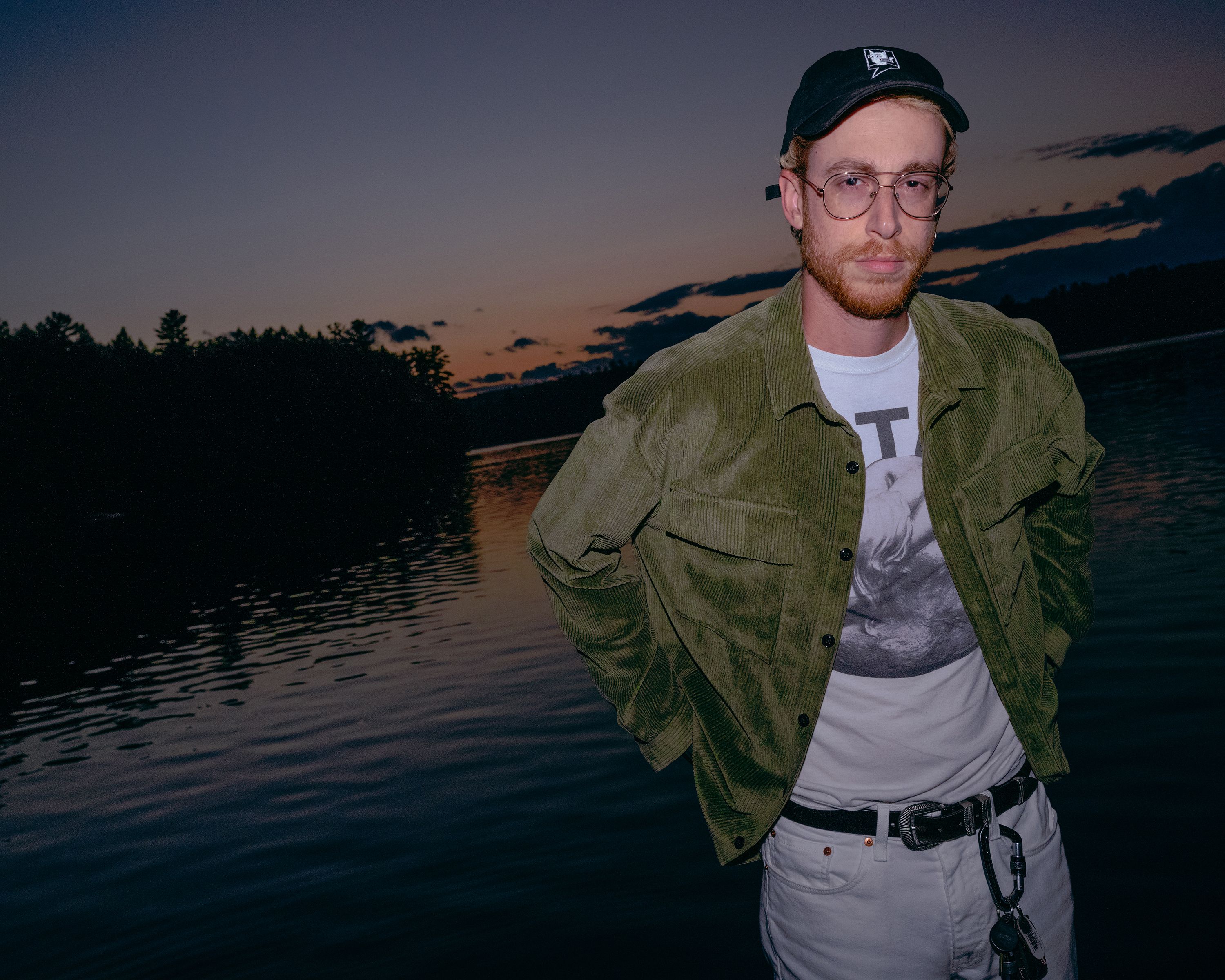 Dana Why is the musical alias of Dana Yurcisin, NJ-born and bred singer, songwriter, multi-instrumentalist and producer. A maximalist at heart, his productions are brimming with musical ideas and experimentation that span genres, while retaining the strong melodic foundation of pop. Having self-recorded and released four albums and two EPs between 2009 and 2019 under the name Static Sex, Yurcisin started releasing music under his own name in 2020, a choice that came with his increased comfort in mixing his voice front and center in his songs. The Lyre, a sprawling 15 song set of rock epics and tumultuous, heart-on-sleeve storytelling is his first full length statement under his new name, boldly introducing a new era of bigger, more hi-fi productions for the artist. We caught up with Dana to see what inspires him and to get to know his musical roots this week of his album release:

I started recording music in GarageBand around 15 years ago, but it wasn't until I gained some musical confidence with my college band that I was ready to release a solo record. The first came out in 2009, and I recorded and released 3 more over the next several years before deciding to use the Dana Why name, which is just an obvious play on my last name. Very few people can pronounce it, so this was a way for me to bypass that issue.

I've been obsessed with music for as long as I can remember. I would mimic any sounds I heard as an infant, and as a child I would hum along to whatever my parents would play at home or on the car radio. My earliest memories singing songs to myself were Give Me One Reason by Tracy Chapman and In Your Eyes by Peter Gabriel, because I heard it in the trailer for Say Anything on some random vhs my brother and I rented. My parents were kind enough to pay for piano lessons early on, which a few years later transitioned to violin lessons. Not until I first heard Weezer and Blink 182 did I finally pick up a guitar. My first musical projects were just blatant rip offs of those two. I've since learned to weave in my influences a bit more naturally, and sounds from those bands can still be heard in my current music, as well as that of my other band, Grasser.

My first concert ever was 98º, and I still love a lot of boy band music from that era. My first concert of rock bands was Taking Back Sunday, with Saves the Day and moneen opening, at Convention Hall in Asbury, which was very formative.

My writing process is pretty scattershot. Most of the time it involves me getting high and just fucking around on my guitar, sometimes with a looper, and using voice memos on my phone to capture an idea if I land on anything interesting. Sometimes, but only very occasionally, does a full song emerge in this way, in one go. Usually it's me compiling a few of my favorite little pieces from my voice memos and compiling them together into a Frankenstein-type situation after the fact. That's how the Lyre was made. While living in Maine, me and Ryan Harris, my very close friend who I convinced to move up there with me, would go to our practice space, blaze and just jam. So many of the musical ideas for the album came from that tiny little room where we could blast our amps at full volume without a care in the world, and then I composed the songs later like a puzzle. Once the initial structure is locked down in Logic, I'm very much a "first idea, best idea" type of person as far as all the overdubs. If it feels and sounds good, I do it and move on. Way later in the process, very much to the chagrin of my best friend and drummer Biff Swenson, I have him drum over the mostly-completed tracks. He loves painting within the lines! (He doesn't, but he loves me and does it anyway)

I have such a wide array of influences, which is probably why no two songs on the record sound totally the same. I get bored easily so I'm always digesting stuff of all styles and trying to take my favorite bits and infuse it into whatever it is I'm working on. Bruce is a mainstay for me, a main reason being that Born To Run kind of taught me the *correct* way to go for sprawl. Meaning, if you're gonna make long songs, the movements need to be interesting. I was kind of going for BTR scope with Darkness on the Edge of Town's darker palette. Archers of Loaf is a big inspiration for me, with their incredibly weird dueling guitar work coming in from all different angles. There's a lot of Wrens DNA in these tracks as well. The way Charles mixes their songs and how they build and crescendo is legendary, and something I'm always thinking about when working on my own songs.

I don't have a band to perform any of this stuff live with yet, but it's a goal of mine. I record with absolutely zero regard for how any of it will work in a live setting, because I think they're meant to be two totally different experiences. I don't care if the perfectly placed shaker in your record isn't played on stage. The stage is for visceral impact. For recreating the feel of the song while not worrying too much about replicating it exactly. Records, in my mind, are a limitless space for exploration and experimentation, and to kneecap yourself there just because you won't be able to recreate it live would be a shame.

After The Lyre, I've got two more LPs hovering around the 80% complete mark, so after this album rollout and finishing up our second LP with Grasser, I'll be right back at it with my hopes of getting my next record out by 2024. Maybe, if I'm fortunate, I'll even be able to get a band together to start performing these songs for people. They were written to feel larger than life, and while I love nothing more than losing myself to great music in an awesome set of headphones, hearing these songs fill up a room would be beyond gratifying.