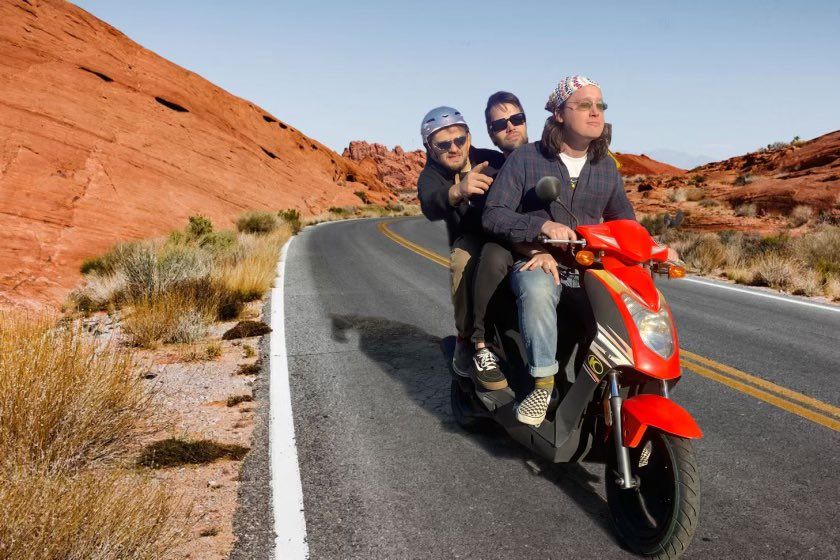 Big Stink is a crunchy three-piece hailing from the depths of a sticky basement in Montclair, NJ. "We'd like to think of our music as if Modest Mouse and Ty Segall had a deformed, radiated baby", the band has said. Big Stink is comprised of Dan Decapio on vox and guitar, Mike Tice on bass, and Brad Odgers on drums. Favorites of the Montclair famed venue Meatlocker scene, Big Stink is a recent addition to Pizza Bagel Records owned by local musicians John Cozz and Max Rauch of LKFFCT.

Big Stink simply comes from the phrase "don't make a big stink about it". It's also a nifty lil name for a significant other. We formed basically out of the pandemic. Initially, it was Dan's solo project for his songs. Dan then reached out to his good buddy Mike Tice from the Montclair music scene to play low-end, and it only felt natural to ask Brad being Dan and him were long-time collaborators in their old band Jean Pool.

We all grew up playing music and knew we wanted to pursue it in our adult lives. Dan and Brad previously were in Jean Pool who had a successful run and a bunch of albums and a loyal fan base. Mike on the other hand had been wasting away on soundcloud and bandcamp with his synth pop lol

The writing process starts with Dan and his endless demos and voice notes. If they hang around long enough he brings them to the band and it's life is basically decided right then and there lmao. Nine times out of ten we end up using them.

Bands that inspire us are endless but to name a few that we connect on together would be Meat Wave, Ty Segall, Blink, and Modest Mouse. The list does indeed go on though.

Our philosophy of playing live is basically like "what would we want to see". Its easy to kinda get cringey here but we believe in letting the energy speak for itself. It exciting for us and we hope it is for everyone else. Also very, very sweaty.

We feel that the live version of our music should be its own entity. Like whatever comes up is fair game. The songs kinda take a life of their own. Solos are different, tempos are usually faster but do try to keep it as close as possible though.

Has the band tour? What has the touring experience been, best shows?  worst shows?

We have not toured yet but we are planning one in the fall. We consider ourselves still kind of a new band being a product of the pandemic. We all work a lot but were trying to really focus now that we have two EPs and a debut LP on the way that were so excited about. The worst show we played was actually a great show but Dan and Mike got bonkered right before and if we think about it long enough we want to die. Honestly, though we were probably fine lol. We make the most and have a blast at all of our shows.

We're fixing to release our full length this upcoming winter and eventually tour it. The new songs are dark and emotional yet garagey and catchy, basically the music we were always meant to make. We're stoked and look forward to many more shows.