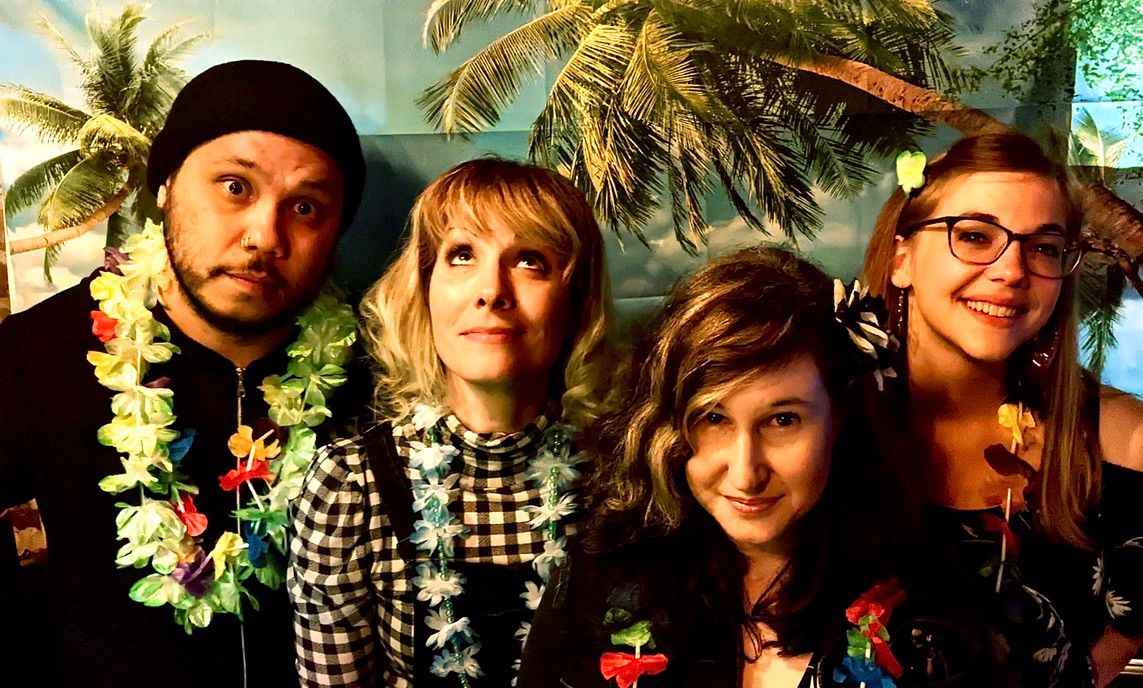 Radio Compass says of their brand of Indie Rock that it "combines riot grrl tip and yelp with the arch tunefulness of peak new wave songwriters, wrapped up and delivered by a loud band that's equal parts bashing grunge and lockstep post-punk." We thought they were a fun listen in our singles column so we decided we wanted to know more. We caught up with the band to see what inspires them, how they formed and much more. As a special bonus the band was kind enough to let BloodMakesNoise premiere their brand new video.

Angela here. After a couple year hiatus from music, I ended up writing an 11 song LP which my friend and ex-bandmate, Steve Lord (Aaron and the Lord, Dirty Bangs, Bodega Grils) helped me record. After that came out, I found musicians and we started playing the NorthShore and Boston circuit. We had a few line up changes over the years but have a pretty solid outfit now and I'm still good friends with all past members. The name came from the idea of finding my way back to music. Music being a compass. But I also just love the word Radio and I honestly still enjoy listening to the radio and not knowing what will come on next. So that name felt fitting.

I got my first guitar when I was 14. My little circle of friends and I were madly in love with Nirvana and heavy into riot grrl and fem-heavy bands like Hole, Babes in Toyland, Bikini Kill. It was so different from what we were raised listening to or what bands looked like and I wanted to be part of whatever "that" was. My best friend, Nicole ("coley"), and I decided we wanted to start our own band and we did. It was awesome because Coley's dad was a musician and totally supportive of it. I can't even describe the feeling that I felt the first time we played with our old drummer, Bre. It was this massive "coming into your own" moment and I never looked back. We got to play all types of cool places including the late, great CBGBs, cool festivals and got to support acts to our music heros Lunachicks, Bouncing Souls and H20. I often joke my first band was my most successful band... all before we could legally drink and right before the deep soul suck of social media. But yeah, it's been part of me ever since. Coley moved to LA and went on to do all types of amazing music stuff over the years (Veruca Salt, Smashing Pumpkins) and I stayed here went to grad school but I have always played (I had an Allston, MA band called Parker Hill and some short lived bands before that).

Nirvana. I definitely had braces and definitely got in trouble for running away from the parent chauffeur to get a close to the stage. Still have the shirt.

It's changed a lot. I used to just get an idea and run to a guitar and bang it out. That is still the case sometimes but lately I've been writing a bass line or doing something on a different instrument or vocal melody then building a song around it. I write pretty quickly and there's not much rhyme or reason to it, to be honest. I do think new settings are helpful or mentally locking OUT the tasks and to do's of the day so I can just write. I am a night owl so most of the songs are born long after the sun goes down.

I came into my own, musically, during the riot grrl movement so a lot of my earlier influences were femmy, queer, punk'ish stuff. Lunachicks and Bikini Kill were huge inspirations and I still love them so much. Nirvana. The lyrics, the performances, the attitude, the song arrangements - such a visceral, invigorating experience for me. I also love dreamy, emotive stuff, especially if it has a flair for the dramatics and quirky interesting voices like Lana Del Ray, Yeah Yeah yeahs and Coheed and Cambria. Things that don't fit nicely in a genre or end up their own in a way, I will gravitate towards and I think that is something to strive toward as an artist. While I don't think RC sounds like any of those bands, you can "feel" that 90s vibe simmering through from time to time I've been told. I also love hip hop, electropop, 80s pop, modern indie rock and if you listen, you will hear whispers of that in the new album for sure.

Live experience I'd like to think is energetic and fun. We really enjoy each other as humans and this music and I think that shows in our performance. An album is a personality in a way. It fluctuates depending on where you are and who you are with. So, no I don't think it needs to be identical but there's something to be said for consistency. So, it's a balance of consistency, reliability and a sprinkle of surprise from time to time. I get super annoyed when people switch things up too much but it's also very boring to do the exact same thing every time. Kind of like a restaurant, you want consistency of the staples on the menu but yes, tell me about the specials. Don't get me wrong, that is a personal thing and to some extent, depends on the genre, etc. Depends on a lot of things. We have. couple rotating members too so you do get a little bit of a different feel to the live performance and I think that's kind of fun.

Has the band toured? What has the touring experience been, best shows, worst shows?

We haven't toured together, no. We've done "minis" but I just consider those long weekend trips. We recently joined Sound Investment Records and Gunner Records so hoping to do a little touring at some point. Best shows would have to be Pouzza. We have played 2019 and this past May and all just had an absolute blast. Love me some Montreal, the festival they've created is something really special, the venues are awesome- those shows, especially this year @ Fouf Electrique was just a blast. Worst shows? There are a couple of my not favorites that come to mind but luckily nothing too horrible, yet!

We just wrapped up a string of shows including a fundraiser for women's whole health alliance and the last day fest @ Once Somerville w/ Speedy Ortiz this past week. We've got  OktoberFest all day music thing for the kick off of Oct in Salem, MA which will be a black then we have this video single coming out halloween.  I will be doing some acoustic and stripped down things as well this fall and prepping my annual fundraiser, Rock for HAWC, support individuals impacted by domestic violence, we are in chats with folks and hope to head back to Montreal and other parts of the Northeast winter and early 2023 to promote our new album, Aloha. What else? I'm in LA this winter and hope to do some RC stuff on the west coast and finish writing up some new stuff I've been working on for our next release.