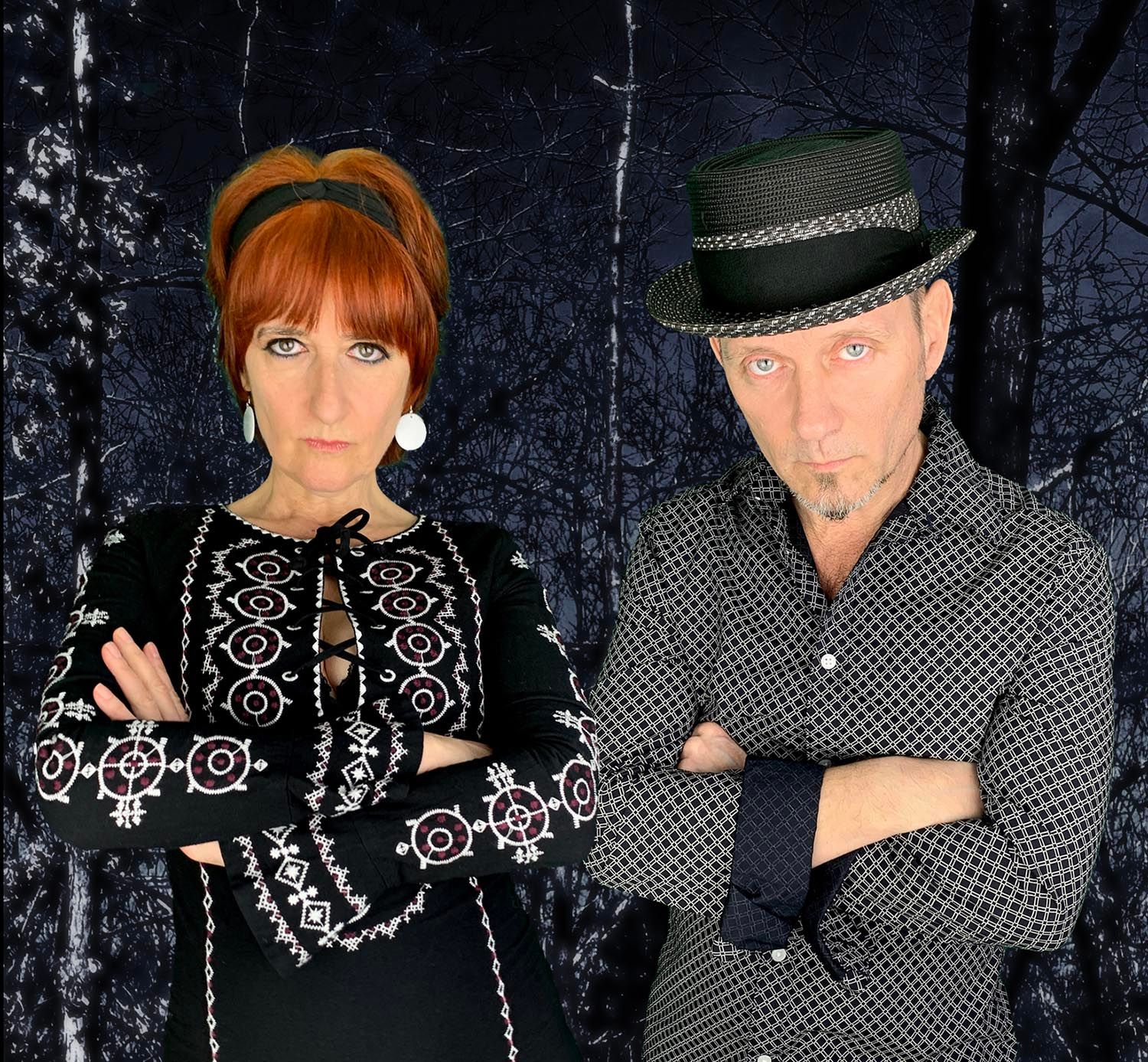 Frenchy and the Punk are a Euro-American Acoustic Alternative post-punk cabaret duo based in New York City. They were listed in the top 25 duos in May 2012 by Yahoo Music Blog's List of the Day. Punk guitarist Scott Helland, originally from the bands Deep Wound and Outpatients, formed Frenchy and the Punk with singer Samantha Stephenson in 2005. The group was originally called The Gypsy Nomads.They adopted their nickname Frenchy and the Punk prior to their first European tour in 2011. The band is currently at work promoting their newest effort Zen Ghost.

Samantha: We had met in New York City, both working temp jobs to fuel our art and music and we hit it off immediately. It wasn’t until 7 years into our relationship that we started writing songs together and performing as a duo. The name came from me having been born in France and Scott having started his music career as a bass player in the punk scene.

Scott: Yeah I was playing solo instrumental guitar music at the time and Samantha and I had already been together for awhile and she was regularly going to my solo shows. She just jumped on stage at one of them in Connecticut, picked up a tambourine to join in and had this great sense of rhythm and timing right from the start. Then later I heard her sing and thought, holy shit, we need to start a duo and perform together. It blossomed and snowballed very quickly from there.

Samantha: Scott started a hardcore punk band with J Mascis and Lou Barlow (now of Dinosaur jr) back when they were teens in Western Massachusetts called Deep Wound. When they disbanded, he continued with his other hardcore band that he had formed with his brother, Outpatients. When Outpatients had run it’s course, he went solo until we met in NYC. I, on the other hand, had not been in a band before. My background was dance, piano, sculpture and painting.

Can you tell us about your new album?

Samantha: Zen Ghost is our 7th album and was released on Oct 28 of this year. We wrote it during the pandemic. It really highlights our love of the more dark alternative and post punk kind of style while creating more atmosphere and nuance than our previous records.

Scott: It’s our most consistent album to date and some of Samantha’s best vocal performances were captured for these songs. She just shines on these tracks and the writing and production just gelled so well. I’m also particularly happy with the guitar sound on this album.

What's your writing process like for Frenchy and the Punk?

Samantha: On the whole, Scott comes up with riffs, I get inspired by what he’s working on and form the lyrical content from there and we work on the melodies and arrangements together. It can be very fluid and the songs at times feel Iike they write themselves or at other times we labor on a song, it all depends. Once we have a skeletal structure, we test it out in our rehearsal studio and it evolves from there.

Scott: I play guitar every day and I come up with a lot of riff ideas and chord progressions so I’m constantly recording them on my phone and later compiling them on my computer. Some ideas work for Frenchy and the Punk and some are more suited to our indie side project Drawing Hands or my solo instrumental spy surf act Guitarmy of One.

Scott: We listen to a lot of different music but Frenchy and the Punk has pretty much been inspired by bands from the Post-punk, new wave and goth scenes. Siouxsie and the Banshees, Concrete Blonde, The Cure, Blondie, Killing Joke, Adam and the Ants etc and more current acts that seem to be inspired in some way by that scene like The XX, Ghost and Russian Circles. I grew up playing in the hardcore punk and thrash metal scene in New England so that obviously creeps in there for me. As kids both of our parents were into gypsy jazz so that had an affect too.

What is the first concert that you ever went to?

Scott: Local act was the Vandals a 4 piece punk band based in Western MA, and the national was Motörhead, it was my first rock concert at the age of 13. They were amazing and blew my mind. It was so much better than the stuff being played on the radio at that time in the early 80s.

Samantha: I think the first band I am aware of seeing was the Pretenders. I don’t remember any local acts.

What is it like for you to perform and what is your philosophy on playing live? Do you think that live music should be the performed the same as the recorded version or should it be its own thing?

Samantha: The thrill of performing live is addictive. When all the elements align, it is a powerful and empowering experience and can take you into that magic zone where everything is possible and the whole universe is open to you. Live music will always be more intense than recorded music. I come from a dance background so I believe the visual and physical aspects are a big part of the experience. The exchange of energy between the audience and the performer is something special, a totally different experience than listening to a record. After seeing the music live, when you listen to the record you can be transported to that energy of the live concert.

Scott: I feel it really depends upon the artist. I saw Frank Zappa in the late 80s and the few songs I knew were totally changed and that was cool. When I saw the Ramones it was pretty much like the record, perhaps a bit faster, but that’s what works with bands like that. Acts that lean towards a more traditional song structure and have more hook based songs seem to play the songs just like you hear on the album.

What has the touring experience been like? What would you say were your best and worst shows and why?

Samantha: We love touring, we both enjoy the feeling of being on the road. It can be extremely challenging at times but overall it’s been quite an adventure. My best shows are when I feel like I own the stage. That can happen in big shows or more intimate shows, there’s really no rhyme or reason and it can’t be predicted or controlled, there are just so many variables. The worst shows are when the sound sucks and the Soundperson hates their job.

Scott: I’ve been playing in bands and touring since the early 80s so trying to remember best and worst is a bit tough. As time goes by, the best ones seem to be on the current tour as things have just gotten better every year and the worst ones have luckily faded into the past. The best ones are obviously when we feel completely on and connected and the audience is totally engaged and it’s just magic all around. The worst ones that I can actually remember are when I’ve had a bug and just felt awful or when the Soundperson person doesn’t care.

Samantha: We finally got to go back to the UK for some shows this month after our European tour being cancelled in 2020 and we’re really feeling the pull to play in Europe again very soon so we’re looking to do a more extensive tour in 2023. Even though we’ve just released Zen Ghost, we’d like to start writing a new record. We kind of feel like this is the time, this is the moment to do as much as we can. You never know what tomorrow will bring.