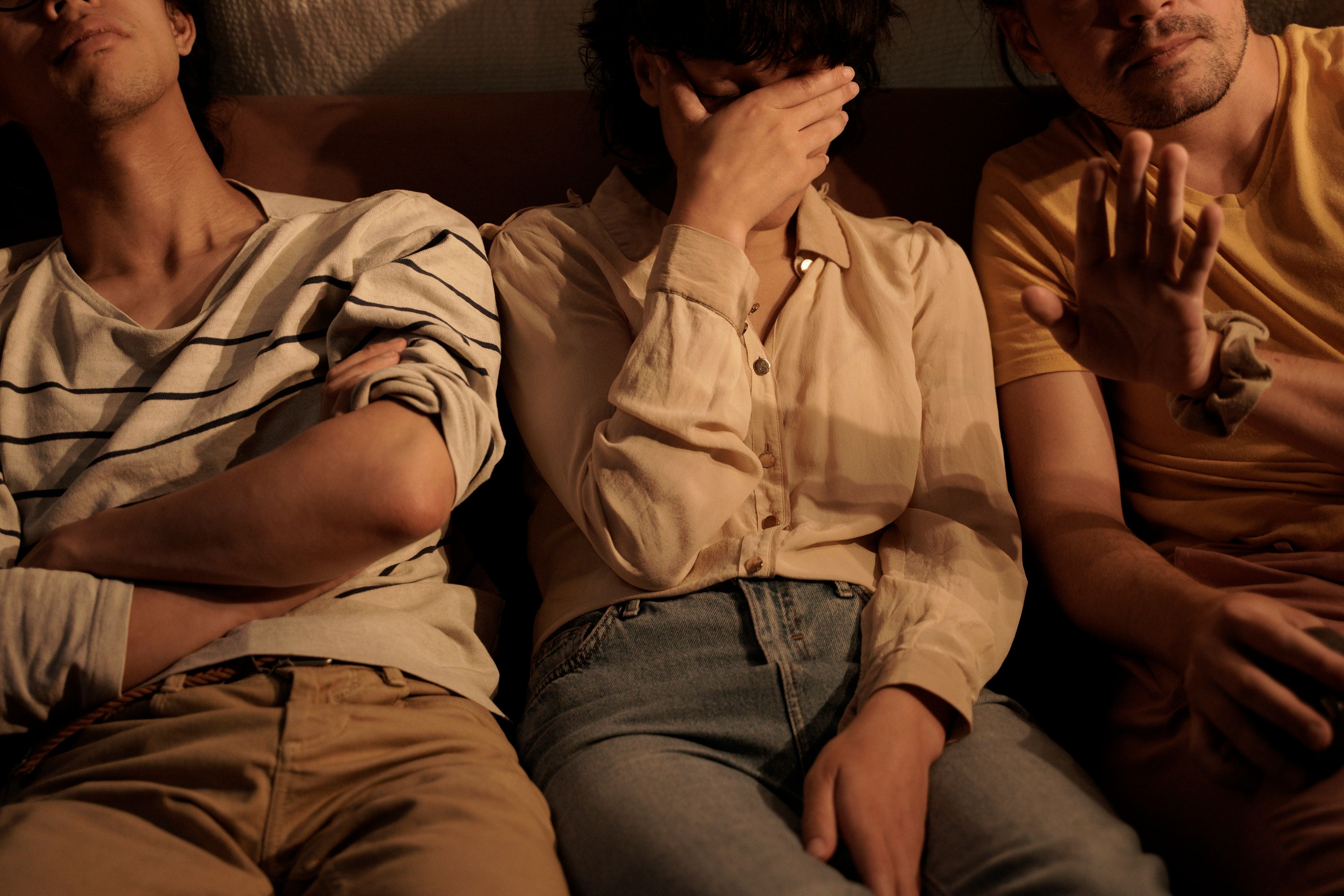 When Bakakaï first sent us music we had many questions like how do I pronounce this band name? Is it some sort of sexual act? What do they look like? Why are they not more famous, because we dig them? Bakakaïis a post-rock band from Paris, France formed in November 2018. Their first EP was recorded in July 2019 in a garage and mixed  at home. Their new LP was done in the same way in July 2020 and mixed at home during Covid. They told us "We like to make our own music videos too. We love doing things ourselves." So vague, so we had to know more!

COSSAL The band formed back to November 2018 ! At this time, Luka and Marie were posting a little ad on a music forum to find people to play with, and I was in desperate search of a band to join.

LUKA Marie and I knew each other for a long time and we wanted to have a "real band" together. We were a bass and drum duo and we needed a really cool guitarist and we found the coolest so the band formed pretty quickly. For a while we were four but it didn't click.. sorry...

The name comes from a Polish writer named Witold Gombrowicz. Bakakaï is a collection of weird short stories. Everyone should read Gombrowicz.

MARIE Cossal was part of a uni band named PENIS. Marie was in a rock band called Ophite. Luka was never part of a rock band before Bakakaï because he despised musical projects unless they were parodic, like his hip hop project Frederic Crew.

LUKA I played different instruments when I was a kid and started to play the guitar around 14 or so. I had a small band in High school, a jam band mostly, and then I recorded some stuff on my own because I was obsessed by Paul Mc Cartney's diy albums. My first collaborative project is called Frederic Crew (https://soundcloud.com/frederic-crew) and it went for a few years, then I made Ciels which is a solo project https://soundcloud.com/cielsmusic Then I decided to play the drums and something clicked about being in an actual rock band. I felt that I fitted more. No notes to remember, no frontline, just drumming.

COSSAL I should add that PENIS stood for "Philarmonic Electric New Independant Symphony", so it was kind of an artsy thing (no it wasn't).

I also played in a punk band in high school, just one year after beginning to learn guitar. I was terrible.

LUKA You are right. I can't remember what it was.

COSSAL Damn that's true, mine was a AC/DC family cover band, kind of cool. The second concert was the high school punk band which I joined one year later. It was stupid, but high school stupid, so good stupid.

MARIE Either we put together parts that we came up with during jam sessions (or we start from a guitar riff or a bass line), or the song preexisted in a simple form (like "Wintertide" or "Success"). We like the process of collage.

LUKA As a former guitarist I often present some chords to the band, mostly three-string chords because I know that if Cossal likes the big picture he will do wonders by adding his colour to the very simple progressions I wrote. When the band comes up with parts I tend to try changing the time signature so it becomes more fun for me to play, or I completely change the drum part in search for odd superpositions.

MARIE Yes and that is very annoying.

COSSAL We don't have real "writing sessions" : most of the times, band practice equals a big old jam articulating around a guitar or bass riff, and it sometimes takes multiple and multiple jam sessions before two or more of these riffs are frankensteined together to make a whole new song. I also have the funny feeling that sometimes we write our songs like directors make exploitation films : our songs can be very gimmicky, and it is not rare to hear snippets of conversation like "Hey, let's make a song which looks like it come from a 70s kung-fu movie" during our sessions.

5. What other artists or songs inspire your music?MARIE When I was in London, bedroom pop was booming and I discovered many interesting bands. One of them was Her's. I was very impressed by their performance, especially the song "What once was". They were playing at the Dublin Castle a few days before my return to France; I think it's the last concert I saw there. Sadly they died in a car accident in 2019, in the middle of their first US tour. RIP Stephen and Audun.

When it comes to writing, maybe we were influenced by Chocolat or even by old progressive rock bands like King Crimson (which explains the 9-min songs). There was such curiosity and freedom in their music. It was the case with 60s psychedelic rock bands too. They made a lot of crossovers, allowing explorations in rhythms and scales. For instance, the medieval inspired music of Pentangle could not be produced today for commercial reasons, although it's definitely not inaudible. And for French lyrics and melodies I am partial to Serge Gainsbourg whose best pieces are also from the 60s and 70s.

LUKA I always was a big prog rock fan, I was fascinated by the long and diverse songs made like theatrical pieces, the intricated rhythms and the way these bands blurred the lines between genres. Math rock and post rock are currently my main sources of inspiration. Hella is one of my favourites, noisy two-piece with tons of energy. Cardiacs with their perfect blend of post rock and weird psychedelia, Shellac, just because Steve Albini gives me thrills. I also listen Life without Buildings at the moment, amazing singer and band, and Crack Cloud, a fantastic project. Shoutout to Wet Dyedream, a french band that made a wonderful cover of lavender town.

COSSAL I discovered the majority of the bands on the playlist thanks to Luka and Marie ! The first bands they made me listen were Equipe de Foot, Ty Segall and Deerhoof, and boy am I a big fan now. What I like the most with these bands is how they achieve to blend elegant melody with stupidly noisy riffs, and I think it affected how I tend to write songs structures. As Marie said earlier, we really like to make collages, which translates the fact that we are very fond of dynamic variety, as it can be found in these bands songs.

LUKA Our first EP was pretty much the same as our live version. The album has many overdubs and things that we couldn't do live (because we have no organist) . But Cossal has a very cool pedalboard with stereo output and some kind of organ-like sounds so we could try to make something out of it. We also have pads to triggers sounds so... Since we made the album before playing it live we want to work on live versions of the album that are something of their own, but every song can be played with only  bass guitar and drums.

COSSAL In our case, I don't think live music should be identical to recorded music, but I don't think it should be it's own independant thing either. Thanks to COVID, we have more recording experience than live experience, but when we compose music, it's we with a live setting in mind : is the song fun enough to listen "as is" ? Is it playable live ? Are the sound our instruments and gears make good enough for a live show ? The recorded version is just a by-product of this live reasoning, and more than often, added lines and overdubs are here to compensate what the song lacks in live energy. It always leads to something interesting, sometimes very different from the intended original version, but not playable live since we only have two hands each. So here we have two different versions of a same song, which should be the same in an optimal setting, but I like to think that these two versions complete each other.

The best examples in our album "Vous êtes ici" would be "Cosmos" and "Bakkhaï", which are two songs with heavy overdubs and samples. I really like the way we play it on our practice sessions : it's more straight forward and compact, and makes the songs go from prog to very garage.

LUKA We haven't toured yet. Would be hard without a label and we have jobs so it would take a lot of organisation and money. We only played live twice (covid didn't help) and it was in a jazz lounge restaurant, so the experience was not really great. We would love to play in front of an audience of rock enthusiasts.

COSSAL Our first concert was in November 2019. Our second in February 2020. We were really motivated to find more venues, but then came March 2020 ... Then after the first lockdown, we recorded our album during the summer, and we focused on this album making more than in live training. I think it was a good thing, we learned a lot and we are very proud of what we made. We even made a animated music video which took us a solid ten months. Now that the album is out, we're back for live training !

LUKA Definitely more recording. It's my favourite thing.  DIY recording and mixing are very satisfying. I guess for now I enjoyed it more than the live events. We have a lot of pieces waiting to be put together and exciting things to try. Drumwise, I want to work on drunk hip hop beats, drum and bass tricks and new odd time signatures. Maybe drum machine parts... Who knows!

COSSAL Yes recording ! We have so many songs I can't wait to practice and record ! Enough to put a whole new album if I'm right ! We will also try to practice more for live events, maybe go for a live-training retreat somewhere in the french countryside. There are so much cool concert venues in Paris, and we have lots of friends in Bordeaux where the garage scene is top notch, it would be a blast to try our songs live !

Definately! You can buy it for free (or eventually for money) on our bandcamp and it comes with a whole secret bonus album, so go for it !

Do you recommend a particular pedal maker ?

I'm glad you asked. Yes of course. His name is AnalogWise Pedals. He makes wonderful and original gain pedals  and he is based in Warsaw, and he is a wonderful human being. Probably one of the most underrated builders right now. You should check his work as soon as possible. ships worldwide ! go !