THE INAUGURAL IN BETWEEN DAYS SUMMER FESTIVAL (QUICNY MASS) 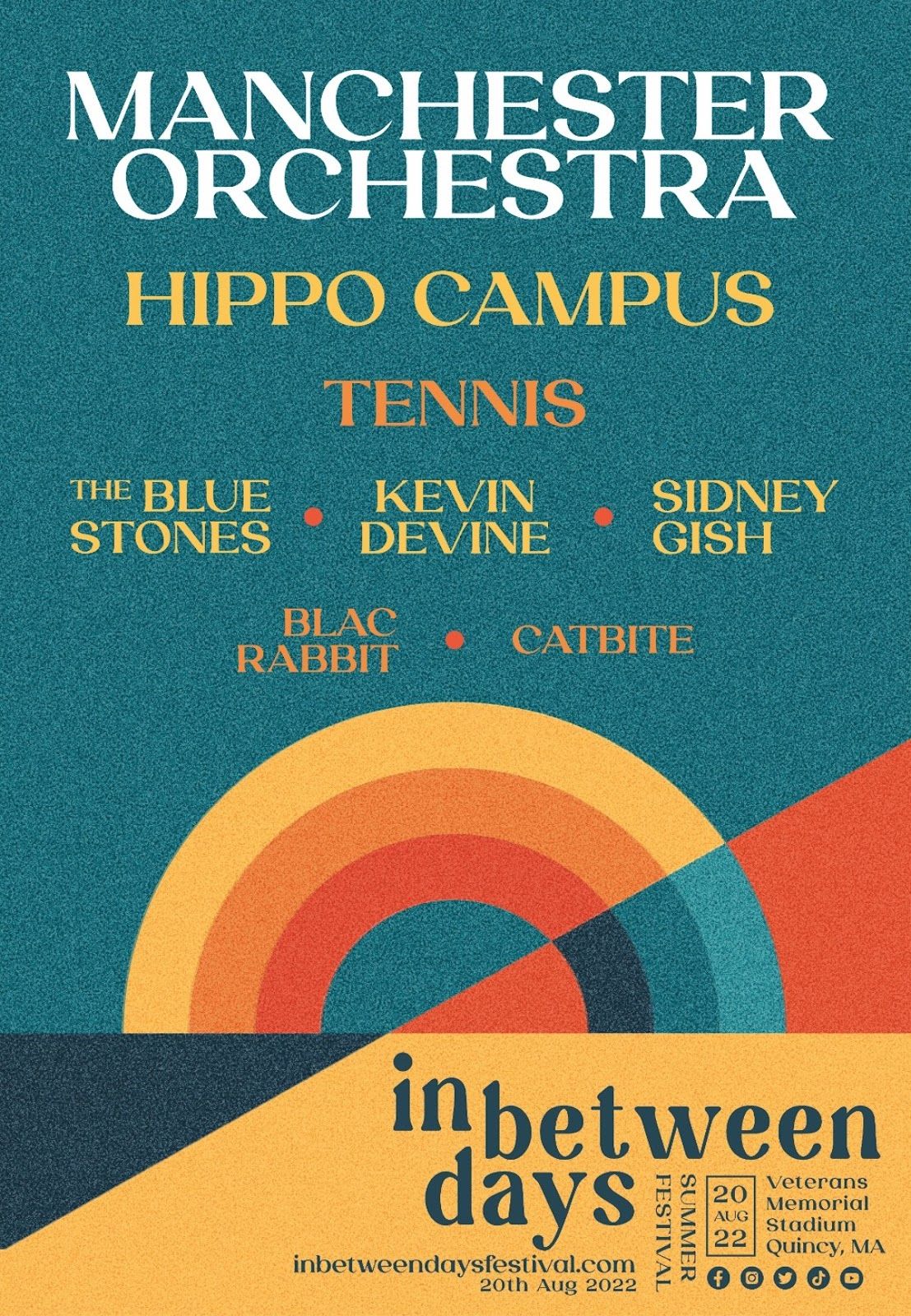 We don't usually promote events on here, but cool indie events like this that aren't huge bullshit like Coachella are hard to find. This is a worthwhile one to check out! (Yay Kevin Devine!)

The best day of Summer 2022 has finally been unveiled. Heritage Sports Ventures is proud to announce lineup and details of the inaugural In Between Days summer music festival, set for Saturday, August 20 at the historic Veterans Memorial Stadium in Quincy, Massachusetts.

In Between Days is purposely slotted towards the end of August -- before the end of vacations and the beginning of school -- and destined to become a high-point of the care-free summer season. The vibrant performer lineup is headlined by Manchester Orchestra, leading an electric and eclectic slate that features Hippo Campus, Tennis, The Blue Stones, Kevin Devine, Blac Rabbit, Catbite, and Boston’s own Sidney Gish.

"It is the best day of summer in every sense: Great music; spending time with kind people; immersed in a really fun experience where we can catch up and meet friends old and new," says Heritage Sports Ventures CEO Alex Magleby. "It’s one of the last days of summer vacation, one last time to laugh, dance, and be free. It’s coming home and reconnecting with my best friends, and catching up for a massive encore before school starts. It is the rebellion of summer, colliding with the nostalgia for a return to normalcy. Being back with best friends, reminiscing and celebrating together before the sun sets."

Gates open at 11 a.m. on August 20, and live music and entertainment fills the air throughout the day and evening until 9 p.m. Tickets went on-sale this past Friday via Eventbrite and inbetweendaysfestival.com, with early bird pricing active until July 9.

In Between Days takes place at Quincy’s Veterans Memorial Stadium, the recently renovated open-air home of the New England Free Jacks  rugby team, located eight miles south of Boston within the beautiful settings of Merrymount Park. The historic stadium, which opened in 1938 and hosts several sporting and community events throughout the year, is easily accessible via Interstate-93 or the MBTA Red Line. There is plentiful on-site and area parking for those attending the festival, with parking passes available for purchase.

For In Between Days, the stadium will be transformed into a welcoming festival oasis for an afternoon of music, entertainment, local food and craft beer. The vendors taking part in this inaugural In Between Days will be unveiled in the coming weeks.

For the organizers, In Between Days is more than a music festival -- it's a mood, a sentiment, and a feeling we hold on to throughout the year, captured only during that high-point of summer.

"Good vibes. Good people. Great music," adds Magleby. "That’s how I want to celebrate the end of Summer 2022, and every year after."